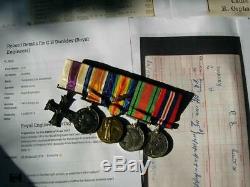 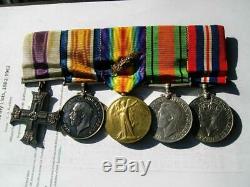 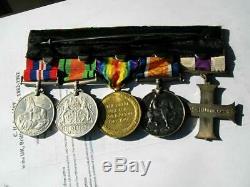 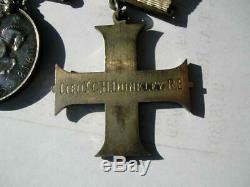 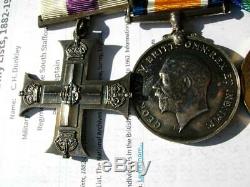 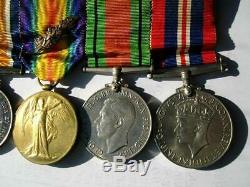 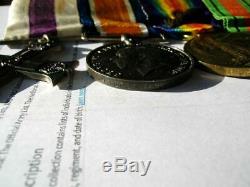 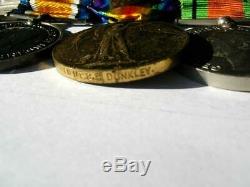 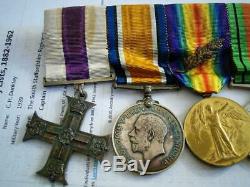 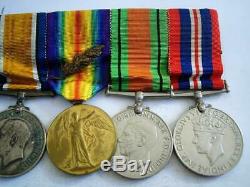 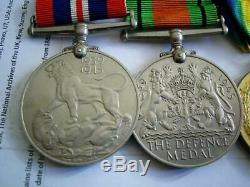 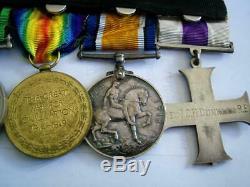 London Gazette 1 January 1918. The MC is granted in recognition of "an act or acts of exemplary gallantry during active operations against the enemy on land", in WW1 this was an officers only award, a high class 2nd level bravery award. Charles Henry Dunkley served as a 2nd Lieutenant with the Royal Engineers from August 1915 on the Western Front, rising to Lieutenant on 1 July 1917. He was mentioned in dispatches (London Gazette, 11 December 1917), also receiving the M. In the 1918 New Year's Honours.

Promoted to Acting Captain on 16 April 1919, he continued to serve during the inter-war years. On 6 August 1939, as another conflict with Germany loomed, Dunkley became a Major (Territorial) in the South Staffordshire Regiment (London Gazette, 22 December 1939), retiring from active service with Staffordshire Regt in 1941, on the "Unemployed" Majors list but probably active within Home Guard / Home services, for further research. Great War WW1 Military Cross MID group Royal Engineers & 59th Staffordshire Regt. WW1 Great War group Mentioned in Dispatches (MID) Military Cross, British War & Victory medals plus WW2 Defence and war medal Battle of Arras 1917 Medals in excellent condition with very little wear and definition of design is sharp, as good as you could find and has not suffered like some from over polishing, medal index card confirming MID emblem and WW1 pair, some history supplied confirming Military cross, for further research, please see pictures for condition Royal Engineers tunnel under "No Man's Land" Military Cross, G. Royal Engineers-Arras 1917 Charles Henry Dunkley served as a 2nd Lieutenant with the Royal Engineers from August 1915 on the Western Front, rising to Lieutenant on 1 July 1917. Preparation for the Battle of Arras 1917 Royal Engineers Arras 1917 From October 1916 the Royal Engineers had been working underground, constructing tunnels for the troops in preparation for the Battle of Arras in 1917. Beneath Arras itself there is a vast network of caverns called the boves, consisting of underground quarries and sewage tunnels.

The engineers came up with a plan to add new tunnels to this network so that troops could arrive at the battlefield in secrecy and in safety. The size of the excavation was immense. In one sector alone four Tunnel Companies of 500 men each worked around the clock in 18-hour shifts for two months. Men of the South Staffordshire Regiment WW2 The South Staffordshire Territorial Regiment became part of the 59th (Staffordshire) Infantry Division.

In March 1939, after Germany re-emerged as a significant military power and occupied Czechoslovakia, the British Army increased the number of divisions in the Territorial Army (TA) by duplicating existing units. The 59th (Staffordshire) Motor Division was formed in September 1939, as a second-line duplicate of the 55th (West Lancashire) Motor Division. The division's battalions were all, initially, raised in Staffordshire.

59th Staffordshire Regiment Established using the motor division concept, the division was formed with only two infantry brigades, rather than the usual three for an infantry division, and was fully mobile. The intention was to increase battlefield mobility, enabling the motor divisions to follow armoured forces through breaches in the enemy frontline to rapidly consolidate captured territory. Following the Battle of France, the concept was abandoned. The division was allocated a third infantry brigade, and became the 59th (Staffordshire) Infantry Division.

LOCKDOWN EASING GLOBALLY, deliveries returning to normal service to most countries in Europe, North America, Russia, Australia and New Zealand, there may be slight delays. I will use 1st class recorded on lower value items but please be patient if your item is delayed, the post is very safe and items are tracked, thanks for understanding. Thankyou for your patience and understanding during these strange times, stay safe and well.

Create your brand with Auctiva's. Attention Sellers - Get Templates Image Hosting, Scheduling at Auctiva. China, Russian Federation, Australia and New Zealand particularly bad at the moment due to countries closing boarders, restricting flights, social distancing measures etc. These rules may be relaxed, May, June, July in stages and post will start moving again.

Thanks for your patience and understanding during these strange times, stay safe and well. The item "WW1 Military Cross MID medal group Major Dunkley RE & WW2 59th Staffordshire Rgt" is in sale since Friday, May 8, 2020.

This item is in the category "Collectables\Militaria\World War I (1914-1918)\Other World War I Militaria". The seller is "theonlineauctionsale" and is located in England. This item can be shipped worldwide.