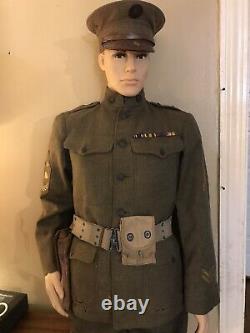 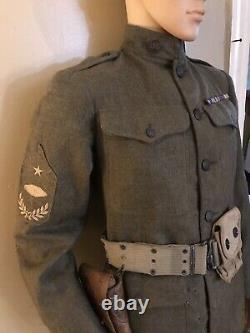 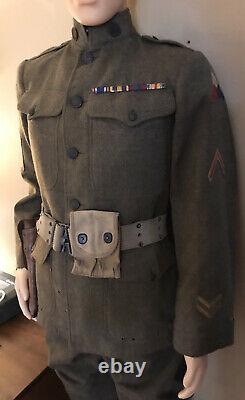 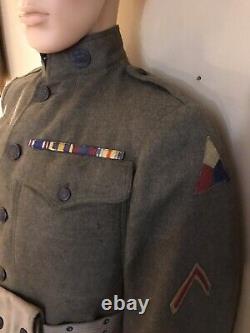 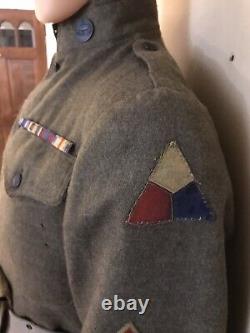 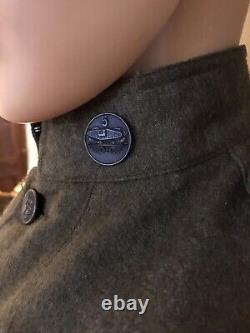 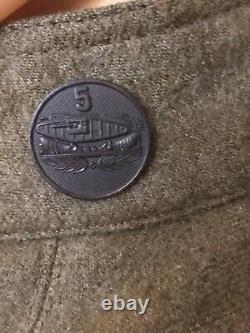 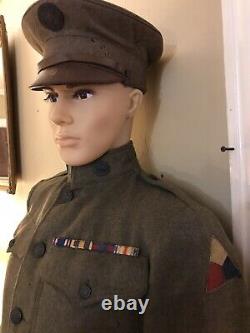 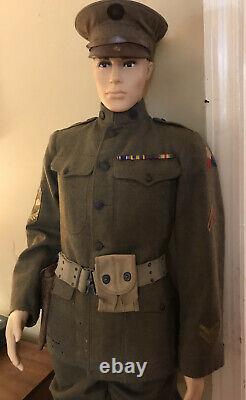 This uniform is complete and original. If you need to see any additional pictures, feel free to ask. HISTORY OF 5th TANK COMPANY. Organized 16 April 1918 in France as Company B, 1st Tank Center, American Expeditionary Force, From Provisional Company B, Tank Service (Organized 17 April 1918).

1268, adopted on August 26, 1917; Superseded by Specification No. 1285 on December 4, 1917. After America had entered the European War on April 2, 1917, the Armys need for olive drab service coats grew, and grew, and grew as more, and more, and more recruits and volunteers flooded into the training camps. In order to meet the ever increasing demand for woolen service coats, and to help speed up production, new specifications for a slightly simplified version of the 1911 Service Coat were adopted some four months after America declared war on Imperial Germany.

The cut of the 1917 Service Coat was described thusly in a post war report whose topic was concerned with the durability of the articles of clothing that were worn by the first members of the AEF. Because of the necessity for conserving wool to the greatest extent possible, our uniform coats during the World War were cut on patterns, which though they did not depart materially from the formal general cut of the coat, were made on economical lines. The most obvious difference to the 1917 Service Coat was that it was now made from a heavier 16 ounce to the yard olive drab melton wool material. The only noticeable external change to its style was that the cuff on each sleeve now had only one row of stitching near its bottom edge instead of two.

Minor styling variations can be found on the 1917 pattern service coats. This however, can largely be attributed to the many different contractors that were involved in their fabrication.

In addition, the increased consumption of wool needed to fulfill the demand for woolen clothing made it necessary for the Quartermaster Corps to relax the rigid standards that it had rigorously been maintained prior to 1917. Beginning in the summer of 1917, lower grades of wool were combined with finer grades, with varying degrees of success, in order to maintain the necessary weight and warmth required by the revised 1917 specifications.

The result of the sub-standard wool and premium wool mixtures was that the pre-war service coats fineness of texture and appearance had been replaced by a coat whose texture was rough and whose color was all too often uneven. 1285, adopted on December 4, 1917; Superseded by Specification No.

1356 on August 28, 1918. Specifications for the 1917 Service Coat were revised in December of 1917. The only change that was made to this specification was that a cheaper mercerized cotton thread was substituted for the more expensive silk thread that had been called for in all the previous service coat specifications.

The item "WWI M1917 Spec 1285 Service Uniform 5th Tank Company, US Tank Corps SR TK ENGR" is in sale since Wednesday, April 7, 2021. This item is in the category "Collectibles\Militaria\WW I (1914-18)\Original Period Items\United States\Uniforms". The seller is "littlebelleblue" and is located in Chesnee, South Carolina. This item can be shipped to United States.