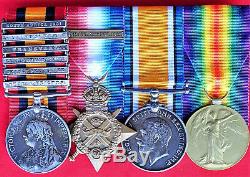 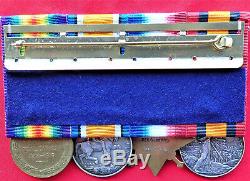 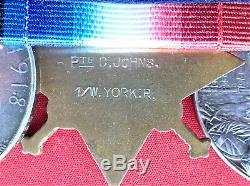 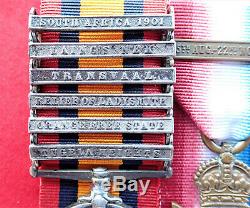 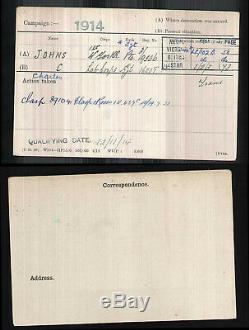 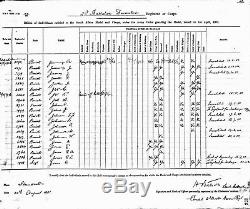 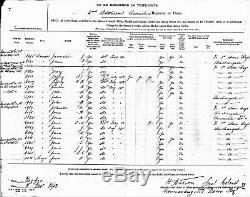 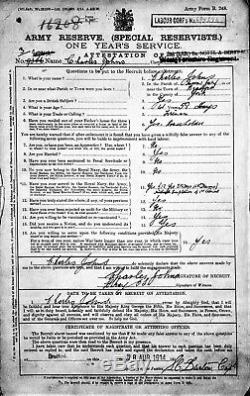 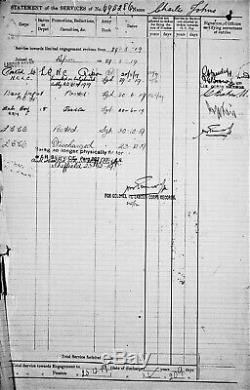 Boer War & WW1 British Army medal group of 4 to C. Johns, who served in both the Royal Navy and Army, was wounded at Ladysmith and served in France from 1914 during the Great War.

After that his date of birth changed each time he enlisted. He enlisted in the Royal Navy on the 14/9/1888.

He states his previous service as being with the 4th Devon Regiment and as having previously been rejected from enlistment as Under chest development. He served: 1st Battalion Home 25/9/89-27/1/91.

Transferred to the Royal Berkshire Regiment 3/11/05 in Halifax (Canada). Enlisted in the West Riding Royal Horse Artillery as a Gunner14/10/08 Regimental number 161. He served until October 1912. On the 28/8/1914 he enlisted in the Special Reserve with a Regimental number of 3/9306 posted to the 3rd Battalion West Yorkshire Regt. Posted to the 20th Notts and Derby Regiment. 14/5/17 28th Coy Labour Corps. Discharged 14/5/18 No longer physically fit for war service.

Please note, these items are located and will be posted from Australia. We appreciate fair feedback from you once you receive the item. We aim to give you, the customer our best customer service. The item "BOER WAR & WW1 MEDAL GROUP WOUNDED LADYSMITH EX SEAMAN JOHNS DEVON & YORK REGT" is in sale since Friday, April 3, 2020. This item is in the category "Collectables\Militaria\1914 - 1918 (WWI)". The seller is "jb_military_antiques_14" and is located in 2/135 Russell St, Morley, Perth, WA. This item can be shipped worldwide.