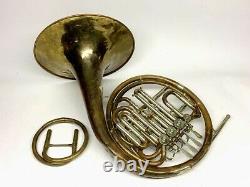 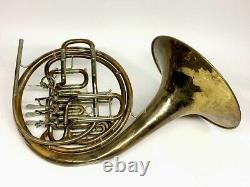 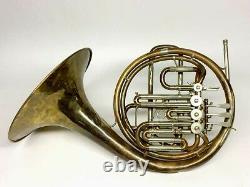 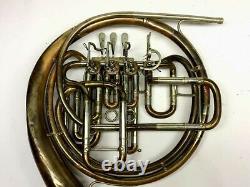 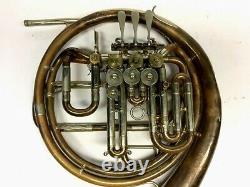 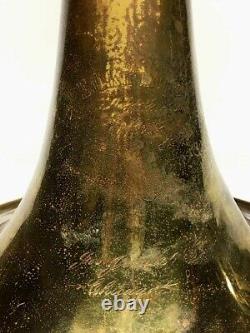 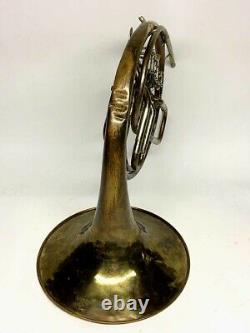 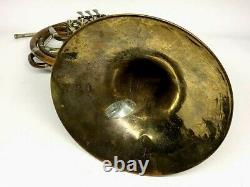 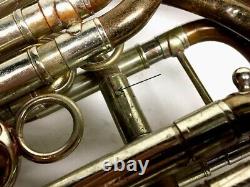 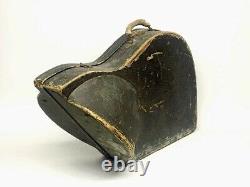 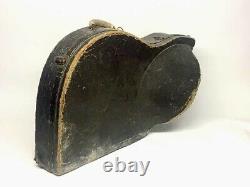 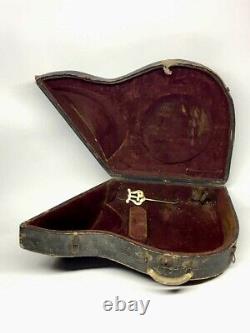 M # for this instrument should be 295125, which describes the F/Bb change valve of the Gumpert Model. This model was first produced in about 1906.

The retailer, Joseph Jiran of Chicago IL, USA, was active there from 1898 to his death in 1957. He was dealing in Pan American and Conn instruments by 1925.

DESCRIPTION: This instrument is built to play in F/Bb. It also includes a mainslide crook for Eb , possibly built from Conn parts. The finish is clear lacquer over brass, with maybe 60% remaining. The lacquer is not original, and was likely added during an overhaul. Construction is mostly yellow brass, with German silver trim.

The compensating system, instead of having two completely separate air paths for the F and Bb sides, simply adds the necessary short lengths to the Bb valve slides, the thumb valve cutting off this air path for the Bb side. This makes the instrument lighter and more responsive.

Compensating horns got a bad rap due to cheap makes from Italy and elsewhere, which played rather badly; but this model was the weapon of choice for some of the era's finest hornplayers. The four rotary valves operate fairly smoothly; however the springs are rather weak and will need replacement. The rotors are a leaky, but not too bad for a horn over 100 years old.

The 1st valve top bearing plate does not seat; it spins and will require repair or remanufacture. There are some pretty good dents in the bell flare and bell throat, and signs of repair. There is a German silver protective patch covering a thin spot inside the bell flare.

There is also a protective patch where the thumb rubs the bell tail. One of the ferrules has a seam split which is leaking, indicated by the arrow in one of the pics. This will need to be patched or replaced. As mentioned above, the instrument seems to have been overhauled and relacquered in the distant past, and the buffing has nearly obliterated the Kruspe eagle logo and the D.

PLAYING QUALITIES: In spite of the issues outlined above, when I tape over the seam split in the ferrule, this horn begs to be played and gives every indication of having a lot of potential. It responds well and produces a lovely, singing tone, with a beautiful high register and a surprisingly good low end as well. I do hear a hint of a rattle, which may be the bell wire. I can only imagine what this horn will sound like when all the issues above are properly addressed. NOTE that I make no representations made about its suitability for your intended use. Original case in poor condition, smelling of mildew. E-flat crook which may have been built from Conn parts. I will sell only to the final recipient/end user. All sales FINAL unless I determine that I significantly misrepresented it.

I'll be happy to answer any questions about the instrument itself. It's a used item, not a new item. I have striven to represent it accurately. If you are not satisfied with the item, PLEASE CONTACT ME BEFORE LEAVING FEEDBACK, and I will do my utmost to resolve the issue to your satisfaction. I do my utmost to honestly and accurately describe and picture my items.