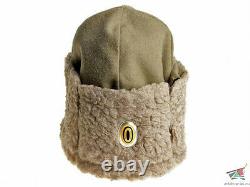 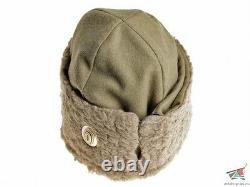 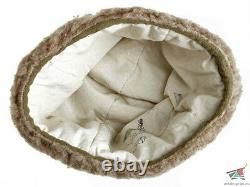 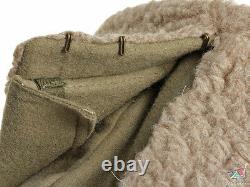 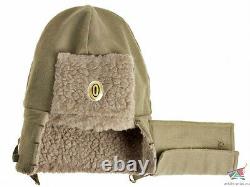 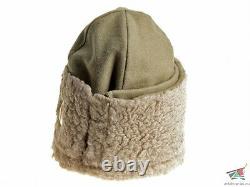 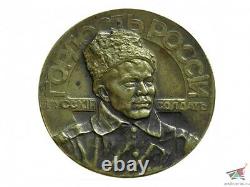 The most wanted item for winter reenactment. Best quality, made totally close to original with all CORRECT materials. Consists of a cap with furred crown, has a valve in order to hide the face from wind and frost. Very rare & impressive item!

Available sizes: 57, 58, 59, 60. We have the best choice of reenactment goods: Napoleonic period, WWI, WWII. May order whatever you want. In 1855, after the campaigns in the Caucasus Mountains, the Papakha was introduced in the Russian army as an official part of the uniform for the Cossacks, and later for the rest of the cavalry. Shortly after the Russian Revolution of 1917, papakhas were removed from the new Red Army uniform because of their association with the old Tsarist regime and the fact that many Cossack regiments of the Tsarist army fought against the Bolsheviks.

During the Russian Civil War, many Bolshevik cavalrymen and officers (like Vasily Chapayev) wore papakhas or kubankas because many of them were cossacks and the hat had been part of the cavalryman's uniform. Papakhas became part of the uniform again in 1935, but in 1941, were reserved exclusively for full colonels, generals and marshals, thus becoming a symbol of status and high rank. Much later, during Andrei Grechko's tenure as a Defence Minister, the Navy followed suit, introducing their own distinct version resembling a smallish "kubanka" with a visor, which was nicknamed " " ("the hat with a handle") by the troops. We have best choise of reenactment stuff always in stock!

We provide services in consultation, making uniforms and reenactment stuff for any military period as well as complete uniforms and uniform sets with shoulder boards, emblems, orders and any equipment for Imperial Russian Officers Guards, Imperial Navy, Army, Cavalry Parade and field uniforms of Cossacks. All the items can be made to order. If you don't find what you need, please ask! The item "EM/NCO RIA Papakha hat m1910 lower ranks cossack hat Russia Imperial Army WWI" is in sale since Monday, December 3, 2018. This item is in the category "Collectibles\Militaria\WW I (1914-18)\Original Period Items\Russia".

The seller is "leibstandart_com" and is located in Praha, Czech Republic. This item can be shipped worldwide.