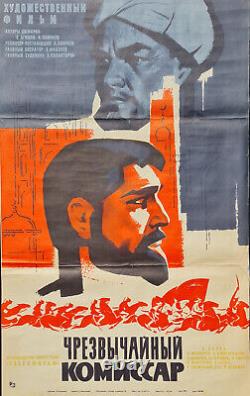 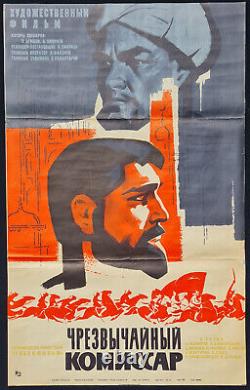 Original film title on the poster. X 34 = CM: 55 x 86. Original vintage Soviet movie poster. (from the first release of the film in Soviet Union - 2 November 1970) for the film. " Chrezvychainyy komissar" - The basis of the picture is strictly documentary and is based on true facts related to the first months of the formation of Soviet Turkestan.

A ring was tightened around the young republic, enemies were advancing from all sides. In these difficult days, a rebellion broke out in Tashkent, led by the traitor Osipov, a recent military commissar of the new government. The counter-revolutionaries, having seized power, shot the Red commissars.

Among those sentenced was Nizametdin Khodzhaev. Seriously wounded, he miraculously survived... By Lenin's personal order, Extraordinary Commissioner Pyotr Kobozev arrives in Tashkent. He will have to quickly and accurately understand the situation and take appropriate measures against the counter-revolutionaries. In this difficult situation, Nizametdin Khodjayev played a very important role, whose strong will and conviction helped in the fight against enemies.

Collaborated with the publishing house IZOGIZ. Performed agricultural posters, including together with the artist E.

Pozdnev ("Hello to the participants of the All-Union Agricultural Exhibition", 1955). In 1958 he took part in the large-scale exhibition "Posters and Satire in 40 Years in the Works of Moscow Artists". In the 1960s and 1970s, Aleksandr Lemeshchenko performed social and political posters: "The country's winged defense is famous for its high rise" (1967, together with SI Datskevich), "Leninism is the banner of the era of revolutionary revelation of the world" (1969). Lemesheno worked in the creative-production workshop "Agitplakat" of the USSR Union of Artists, was a member of its editorial board.

The author of the poster dedicated to space The air distances became close to us, we were the first to know the way into space. Under the banner of the party, our country is striving into the vastness of communism! He also worked a lot and fruitfully in the field of film posters.

He worked until the end of his life, in 1984 he died in Moscow. Circulation posters of Lemeshchenko are kept in the Russian State Library, in private Russian collections. The works of Alexander Mikhailovich are capacious and at the same time laconic. This item is in the category "Art\Art Posters".

posters" and is located in this country: US. This item can be shipped worldwide.