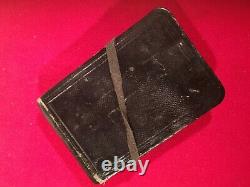 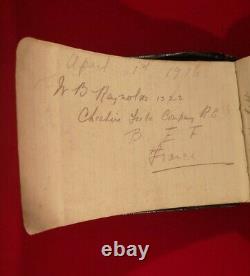 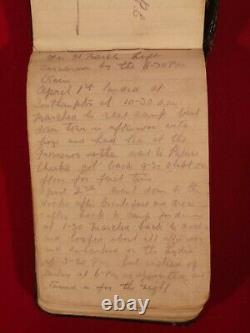 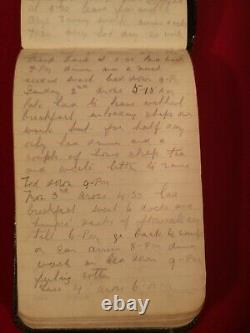 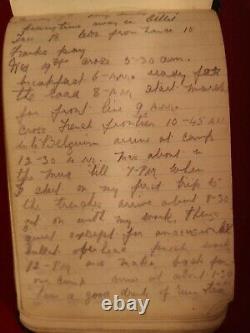 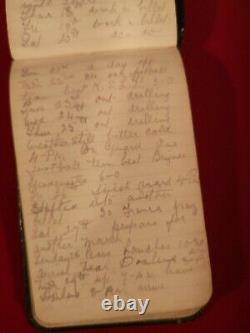 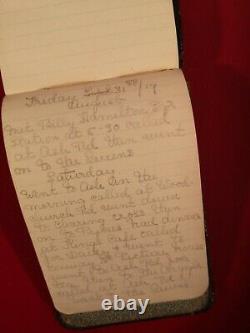 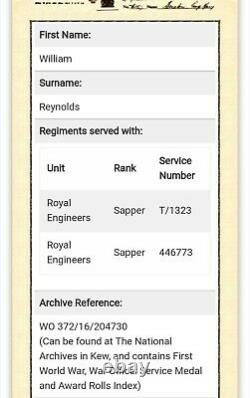 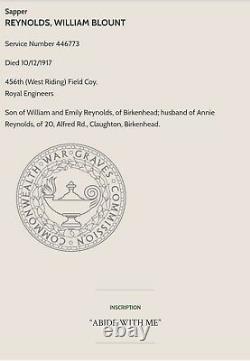 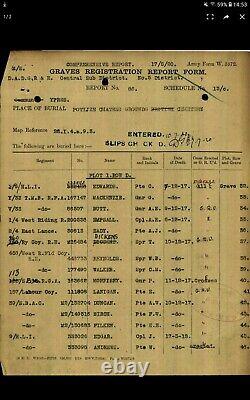 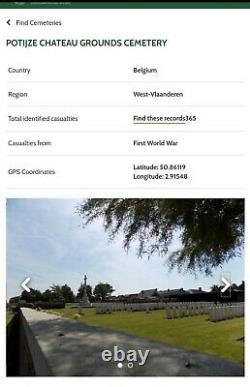 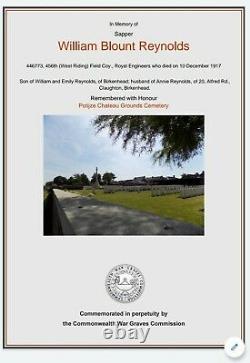 A HIGHLY SOUGHT AFTER HISTORIC W. 1 SOLDIERS NOTE BOOK/DIARY APRIL 1916-AUGUST 1917, ORIGINALLY THE PROPERTY OF. SAPPER WILLIAM B REYNOLDS, 1323, CHESHIRE FIELD COMPANY, ROYAL ENGINEERS. This little black note book has probably spent a lot of time in and around the World War 1 trenches..

Please see the attached photos which are an integral part of this description. All items are described to the best of my knowledge, however I usually don't state the obvious as this can be seen from the numerous photos provided. It is both humbling and quite emotional to handle and read the regular entries made by Sapper Reynolds, from his nervous steps leaving Carmarthen station on 31 March 1916 to arriving next day in Southampton to join his regiment and then go on to the war. The notes take the reader right through to his leave in August 1916.

Sapper Reynolds' comments and observations are almost all in pencil and span some 70 odd pages. The book is in remarkably good condition given its likely life. My research has revealed only one W B Reynolds in the Royal Engineers. It would appear that he changed regiment at some point and in doing so acquired a new identity number - see attached photo showing these two numbers.

The RE's has been involved in every major conflict the British Army has fought and has ever since lived up to its Motto " Ubique " ("Everywhere"). The Corps of Royal Engineers has a long heritage that not many corps can rival.

The Royal Engineers' interest in aeronautics began in the 1860's when they explored the possibilities of using air balloons for aerial observation purposes. This interest developed into an interest in fixed winged aircraft. In 1911 the Corps formed its Air Battalion, the first flying unit of the British Armed Forces. The Air Battalion was the forerunner of the Royal Flying Corps and Royal Air Force.

Royal Engineer tunnelling companies, nicknamed "the Moles", were specialist units of the Corps of Royal Engineers within the British Army, formed to dig attacking tunnels under enemy lines during the First World War. They designed and built the front-line fortifications, creating cover for the infantry and positions for the artillery. It was in the hands of the technically skilled RE's to develop responses to chemical and underground warfare. The RE's maintained the railways, roads, water supply, bridges and transport - allowing supplies to the armies.

They operated the railways and inland waterways, maintained wireless, telephones and other signalling equipment, making sure communications existed. The Royal Engineers grew into a large and complex organisation, by the 1 August 1914, the RE consisted of 1056 officers and 10394 men of the regular army and Special Reserve, plus another 513 and 13127 respectively serving with the RE of the Territorial Force. The officers and men manned 26 coastal defence Fortress Companies (of which 15 were overseas), 7 Signal Companies, 2 Cable and Airline (signalling) Companies, 15 Field Companies, 3 Survey Companies, 2 Railway Companies, and miscellaneous other units. In 1915, in response to German mining of British trenches under the then static siege conditions of World War One, the corps formed its own tunnelling companies.

Manned by experienced coal miners from across the country, they operated with great success until 1917, when after the fixed positions broke, they built deep dugouts such as the Vampire dugout to protect troops from heavy shelling. By 1 August 1917, it had grown to a total of 295668. It was twelve times bigger than the peacetime establishment. From October 1916 the Royal Engineers had been working underground, constructing tunnels for the troops in preparation for the Battle of Arras in 1917. Beneath Arras itself there is a vast network of caverns called the boves, consisting of underground quarries and sewage tunnels.

The engineers came up with a plan to add new tunnels to this network so that troops could arrive at the battlefield in secrecy and in safety. The size of the excavation was immense.

In one sector alone four Tunnel Companies of 500 men each worked around the clock in 18-hour shifts for two months. Further research into Sapper Reynolds has now led me to conclude that, contrary to my original understanding that he survived the war, he actually lost his life in the line of duty on 10th December 1917.

Screen shots regarding my recent findings are attached. Please appreciate that all items are antique/vintage/used and therefore are likely to show varying degrees of age related wear and tear. A true antique, historical document which simply oozes history. It is a pleasure and indeed an honour to have owned and read it but I feel that it should be held in future by a war historian or serious collector of WW1 militaria and wartime documentation.

DIMENSIONS: 14 cm x 9 cm 1.5 cm. All of these and the like (if any) are strictly for the buyers own account. Every effort will be made to pack items as safely and securely as possible, please appreciate however that no liability will be accepted for loss or damage once the item has been dispatched. The item "HIGHLY SOUGHT AFTER HISTORIC WW1 SOLDIERS NOTE BOOK DIARY APRIL 1916-AUGUST 1917" is in sale since Wednesday, April 8, 2020.

This item is in the category "Collectables\Militaria\World War I (1914-1918)\Other World War I Militaria". The seller is "ennarepea" and is located in PENCLAWDD, Nr SWANSEA. This item can be shipped to North, South, or Latin America, all countries in Europe, all countries in continental Asia, Australia.