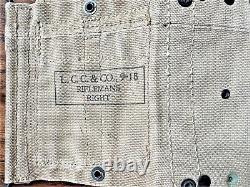 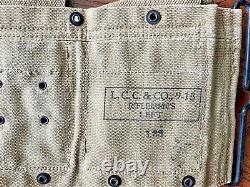 During World War I, the M1918 was known as the Light Browning or the Browning Machine Rifle. The early Browning's were an improvement over the French made Chauchat Light Machine gun which was used by the doughboys during most of their time in the war. The Light Browning's used 20 round magazines and special accouterments were manufactured to carry the gunner's ammunition. This is the standard belt used by Light Browning gunners, manufactured by the Long Company in Sept. The metal cup seen between the BAR magazine pocket and the pistol magazine pocket was used to steady the BAR when fired from the hip.

The butt stock of the BAR was placed inside the cup when the BAR was fired. The cup was found to be impractical and many belts were modified by removal of the cup.

This example is offered in Excellent condition. The pouches are both marked L. 9-18 Rifleman's Right & Left. And the belt is ink stamped.

This is more or less one of the best examples of this style belt that you will find. This item is in the category "Collectibles\Militaria\WW I (1914-18)\Original Period Items\United States\Personal, Field Gear". The seller is "greatfindforyou" and is located in this country: US. This item can be shipped to United States.