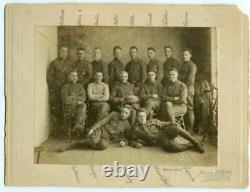 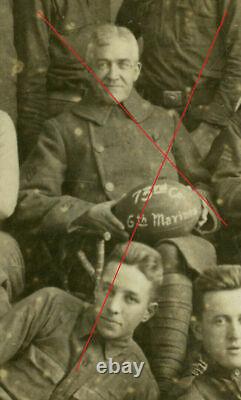 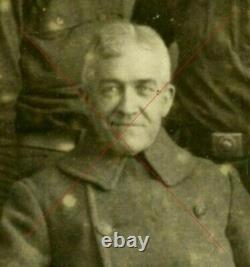 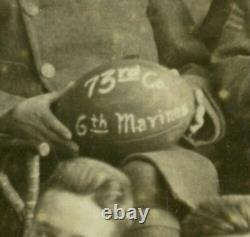 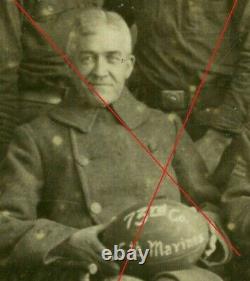 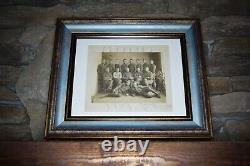 The 73rd Company (Machine Gun) of the 6th Marine Regiment. According to Smedley Butler, Dan Daly was "The fighten'est Marine ever". Daly is probably best known for yelling out to his men during the June 1918 Battle of Belleau Wood, Come on, you sons of bitches, do you want to live forever?

As he charged forward and over the top of the trenches into battle. This quote is one of the few placed around the atrium at the National Museum of the Marine Corps, in Quantico, and has been featured similarly in movies and literature. It is one of the first quotes that Marines learn at boot camp and OCS. Daly seems to have alluded the cameras and there are very few images of him.

The photo, which most likely dates to the Winter of 1918 or early 1919, shows members of the 73rd Company around Daly. All are identified in pencil around the photo margins.

Outside of his famous portrait where he is seen wearing his two Medals of Honor, this is the only other photo of him I have ever seen offered for sale. This is not a mass produced photo and was probably only made for Daly and the 14 members of the team. It has a german photography studio stamp to the lower right. Daly is shown at center holding a football with "73rd Co, 6th Marines" written on it. I surmise, perhaps he was the team's senior enlisted "sponsor" or even a coach.

He is wearing the stripes of a First Sergeant on his overcoat and unlike other photos where he displays a serious disposition, he displays a smirky smile. Marines found all sorts of events to pass the time during the occupation of Germany and sports was probably #1 (next to drinking and cavorting). It is interesting to note, one of the Marines behind Daly wears a captured German belt buckle with roundel. One additional Marine photographed is a Distinguished Service Cross / Navy Cross awardee, Casey V. Card shows rounded corners and some creases with light spotting to the image throughout.

This item is in the category "Collectibles\Militaria\WW I (1914-18)\Original Period Items\United States\Photographs"." and is located in this country: US.