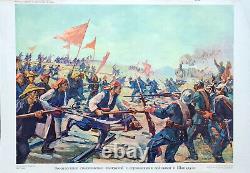 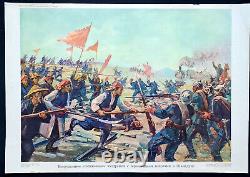 Original slogan on the poster. THE ARMED CLASH OF THE IH? TUANES WITH GERMAN TROOPS IN SHANDONG. IN: 23 x 33.5 = CM: 59 x 85. VISUAL HISTORY TEACHING ART POSTER USED IN SOVIET SCHOOLS. The Shandong Problem was a dispute over Article 156 of the Treaty of Versailles in 1919, which dealt with the concession of the Shandong Peninsula. It was resolved in China's favor in 1922. In 1915, however, China reluctantly agreed to thirteen of Japan's original Twenty-One Demands which, among other things, acknowledged Japanese control of former German holdings. Britain and France promised Japan it could keep these holdings. In late 1918, China reaffirmed the transfer and accepted payments from Japan. Article 156 of the Treaty of Versailles transferred the territory of Kiautschou as well as the rights, titles and privileges acquired by virtue of the Sino-German treaty of 1898 to the Empire of Japan rather than return them to the Chinese administration. The artwork is made from painting made by Strakhov Petr Ivanovich (1921-) was born in 1921 in Leningrad.

In 1946 he graduated from the I. Repin Leningrad Institute of Painting, Sculpture and Architecture. Since 1947 - a participant in art exhibitions.

The artist's paintings are in private collections in Russia and abroad: Germany, France, Italy. This item is in the category "Art\Art Posters".posters" and is located in this country: US. This item can be shipped worldwide.