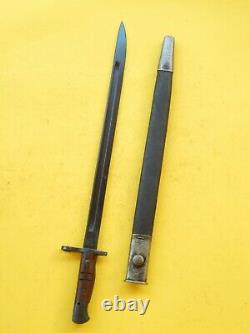 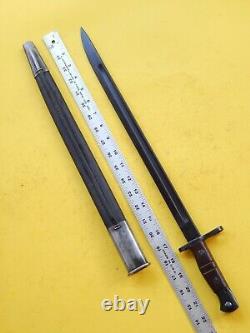 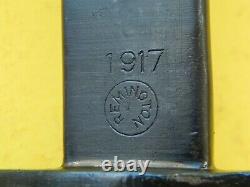 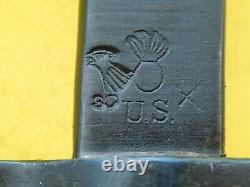 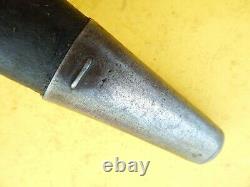 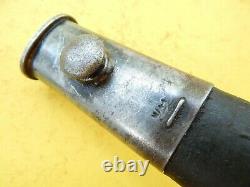 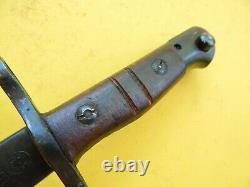 A NICE and UNIQUE 1917 U. MARKED AND ORDNANCE BOMB STAMPED SWORD BAYONET - - These Bayonets have a unique history - Please Note: They were used by the USA during WW1 - during WW11 they were supplied to the UK and the UK re-conditioned most of them and replaced the wooden grips on them in many cases. Many times the UK used 1907 wooden grips on the 1917s and added wood groves on them in some cases. Note also that the UK used 1907 scabbards on the 1917s - since they would interchange and worked with their personal equipment belts.

This Unique 1917 Bayonet has the 1907 scabbard with the round frog retainer - used for WW11 Issue. This baby has it all - History, (Two World Wars - also Remington Manufacture).

One from my personal collection. Please Note: This is one of the 1917s provided to England during WWII lend lease. The British replaced the 1917 grips with Enfield British 1907 wood grips, in many cases the soldiers carved their own groves into the 1907 wood grips. The 1907 US bayonets and the British Enfield Bayonets wood handles were very similar as were the baoynets themselves.

These are genuine US 1917s that the British modified during the world war II. Please examine the pictures to appreciate this unique bayonet. These are Genuine 1917 US issued 1917 Enfield Bayonets that were provided to the UK as Lend Lease during WWII for 1914 English Enfields and Lease provided 1917s from the USA.

Many were re-conditioned by the UK. This is a US Issue Bayonet - note the US and US Bomb stamp on the blade.

I SUSPECT THESE WERE LEND LEASE FROM WW11 - THAT WERE MADE IN WW1. DATES AND US ORDNANCE MARKINGS - THEY WERE ORGINALLY MADE FOR THE US ARMY 1917 ENFIELDS FOR US ISSUE IN WW1 - ALTHOUGH THEY WILL FIT BRITISH MODEL 1913 AND 1914 ENFIELD RIFLES ACCORDING TO ADVANCE COLLECTORS AND THE US ISSUE MILITARY SHOTGUNS WITH BAYONET ATTACHMENT. THESE WERE ISSUED WITH BRITISH SCABBARDS - SO THAT MAKES ME THINK THEY WERE LENDLEASE. MANY WW1 US WEAPONS WERE SUPPLIED TO OUR ENGLISH ALLIES AT THE BEGINNING OF WW11 AND A LOT OF THEM WERE 1917 ENFIELDS - SO THE 1917 ENFIELDS WITH BRITISH ISSUE SCABBARDS MAKE PERFECT SENSE - THESE CAME FROM A MILITARY ARSENAL - SO THEY HAVEN'T BEEN MONKEYED WITH by INDIVIDUALS.

WHATEVER THEIR PAST HISTORY - THESE ARE VERY UNIQUE AND VERY COLLECTABLE AND STEEPED WITH HISTORY. PLEASE NOTE: THIS IS A. THIS IS NOT A FAKE , COPY OR PHONY. THIS IS THE GENUINE ITEM! These unique Bayonets were also used by the US Forces for the famous US Issued Winchester Trench Shotguns! Note: The blade has not been sharpened since leaving the Gov't Arsenal. There are NO rust, bends, cracks, or pitting. Bayonet buttons for attaching to rifles are always checked and work fine! The blade is a nice condition.

Australia and only where legal to own. Will not sell to other than above listed countries. S WW1 REMINGTON M 1917 BAYONET /SCABBARD -US BOMB PROOFED" is in sale since Wednesday, August 12, 2020.

This item is in the category "Collectibles\Militaria\WW I (1914-18)\Original Period Items\United States\Edged Weapons". The seller is "tonymilitary-2008" and is located in Sherwood, Arkansas. This item can be shipped to United States, Australia.