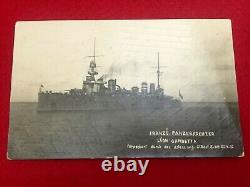 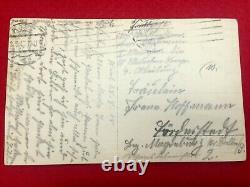 She was launched on 26 October 1901 at the Arsenal de Brest. While on steam trial in December 1903, she struck an unknown pinnacle of rock off Black Rock Islands near Brest in fog and suffered considerable damage. Repairs were not complete until mid-1904. On the night of 27 April 1915, when 15 miles (24 km) south of Santa Maria di Leuca (the south-eastern tip of Italy in the Ionian Sea) in position 39°30'N 18°15'ECoordinates: 39°30'N 18°15'E, she was torpedoed twice by Austro-Hungarian submarine U-5 under the command of Korvettenkapitän Georg Ludwig Ritter von Trapp (later to be known as patriarch of the Von Trapp Family Singers).

Léon Gambetta was part of the French fleet based at Malta blockading the Austrian Navy in the Adriatic, usually from a position south of the Strait of Otranto. At this time the blockade line was moved further north because of expected Austrian naval activity - the Allies were negotiating with the Italians which shortly led to them declaring war on Austria-Hungary.

In spite of the growing threat from Austrian and now German U-boats in the Mediterranean, the armoured cruiser was patrolling unescorted at a reported 7 knots (13 km/h) on a clear, calm night just to the south of the Otranto Straits when she was torpedoed by the U-5. Léon Gambetta sank in just 10 minutes. Out of 821 men on board, 684 including Rear Admiral Victor Baptistin Senes, commander of the 2nd Light Division, were lost along with all commissioned officers.

The French cruiser patrol line was moved South to the longitude of Cephalonia, western Greece. Other sources place her loss 20 miles (32 km) off Cape Leuca. This is a vintage historic postcard capturing Leon Gambetta when she was living happily.