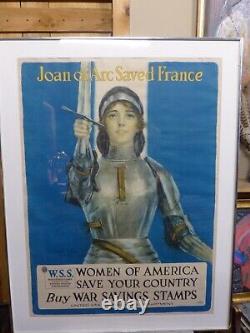 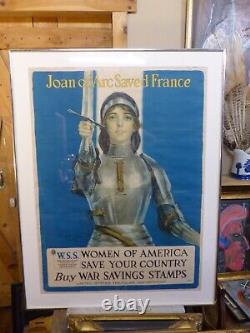 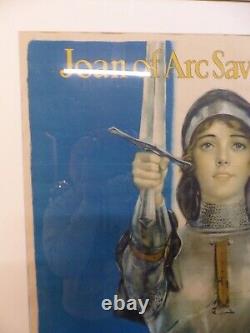 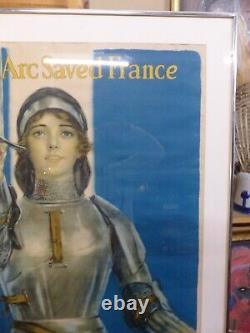 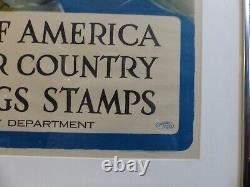 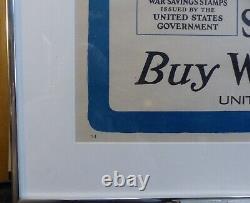 Original poster from 1918 - over 100 years old and in excellent condition. Note, this is the larger 30x40 print in great condition. Originally folded when created and framed under plexi in fantastic condition. You will be hard pressed to find a piece like this one for sale anywhere.

This item was framed by a conservator and the matting and framing look great. Commissioned by the United States Department of the Treasury, Haskell Coffin created this poster in 1918.

In 1909, Joan of Arc underwent a beautification. Had so much press coverage that Joan became a household name in the United States. Joan's canonization at the time also seemed inevitable.

American women were quite familiar with Joan and her story by the time World War I started; and so she became a popular imagine to use in propaganda posters. Haskell's use of a rich blue background and the sheer size of this poster (102 cm x 76 cm) would make this poster easy to spot on any building. Known for his renderings of beautiful women, Haskell's art graced the covers of numerous popular magazines including. Redbook, The Saturday Evening Post, McCall's Magazine. Haskell portrays Joan as a beautiful young woman, who is raising her sword high to protect her country.

Because War Savings Stamps were inexpensive, it was easy for women to be able to afford them, and overtime fill a booklet to transform them in a war bond. Over the course of the war these stamps as well as war bonds raised approximately two thirds of the cost of World War I. Powell, Nicole, "Joan of Arc Saved France" (2014). World War I Poster Project.

This poster shows Joan of Arc holding a sword against a blue and white background. During WWI, women had an increased role in the war effort which led to many posters targeting women being issued by the U.

By suggesting that this would help to save the country and bring their husbands and sons home. The poster was commissioned by the U. Treasury Department from William Haskell Coffin in 1918. Coffin was a popular American painter and commercial artist in the 1920s. He specialized in paintings of women and often had his work featured on the covers of leading magazines.

This poster was created and reproduced as a lithographic print at the time of its distribution. Joan of Arc, a well known French war heroine, caught people's attention and remind them of the conflict happening in Europe. She is depicted in shining armor, raising up a sword with a soft face and a slim figure. According to a paper by Laura M. Rother, in posters of women, soft features were to help civilian women relate to the picture.

These features also made the poster stand out among the sea of other posters depicting soldiers and the enemy. The blue and white of the background, along with the red of Joan of Arc's hair and lips were a symbol of U. This poster connected women to the war effort while also connecting American patriotism to the war in Europe. This item is in the category "Collectibles\Militaria\WW I (1914-18)\Original Period Items\United States\Posters & Prints".

The seller is "zucy" and is located in this country: US. This item can be shipped to United States.