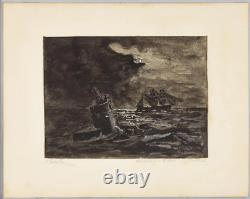 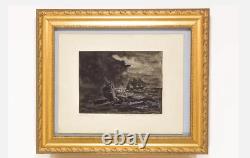 World War I WWI Imperial German Navy U-Boat Submarine Attacking 1920 Painting. Great collectible World War I Painting of a German U-Boat attacking a Bark in the dead of night. U-Boats come into their own during World War I and Germany's Imperial Navy was the most famous and technologically advanced early on in World War I.

The painting was done by a German painter, Grosche, in 1920 that served in the Imperial German Navy during World War I. Framed piece measures 12 inches wide by 10 inches high. Listing and template services provided by inkFrog.

This item is in the category "Collectibles\Militaria\WW I (1914-18)\Original Period Items\Germany\Other German WWI Orig. The seller is "cavaliercards" and is located in this country: US. This item can be shipped to United States.