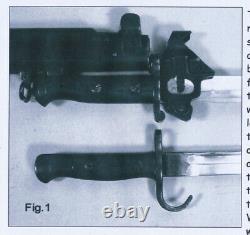 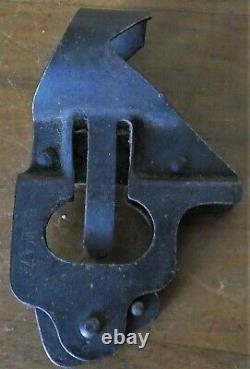 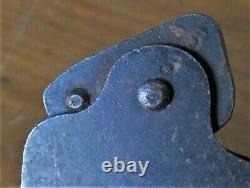 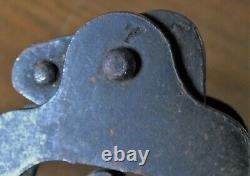 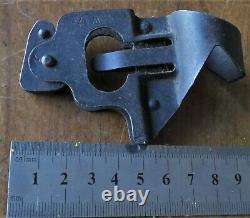 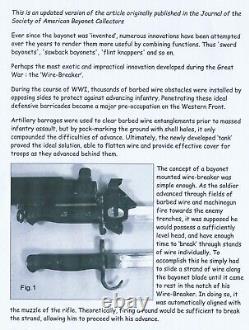 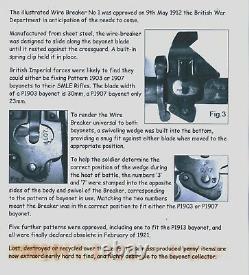 303 Bayonet WIRE BREAKER #1 Mk1 Very RARE & 100% GENUINE. I will mention it HERE a few times :. This listing is for the Number One mark One WIRE-BREAKER only (As shown in images # 2 - 9). No 1 Mk 1 Wire-breaker made to be attached to a Pattern 1903 or 1907 sword bayonet. There is a movable cam at the bottom of the wirebreaker which is positioned accordingly depending on whether it is attached to a Pattern 1903 or 1907 bayonet. The V-shaped groove is designed to line up with the muzzle of a Lee Enfield rifle barrel. The wire to be cut was forced into the V-shaped groove and a cartridge would be discharged, severing the wire. MAKER MARKED and 100% GUARANTEED GENUINE. This is an updated version of the article originally published in the Journal of the Society of American Bayonet Collectors... Ever since the bayonet was invented, numerous innovations have been attempted over the years to render them more useful by combining functions. Thus'sword bayonets','sawback bayonets','flint knappers' and so on. Perhaps the most exotic and impractical innovation developed during the Great War : the Wire-Breaker.

During the course of WWI, thousands of barbed wire obstacles were installed by opposing sides to protect against advancing infantry. Penetrating these ideal defensive barricades became a major pre-occupation on the Western Front.

Artillery barrages were used to clear barbed wire entanglements prior to massed infantry assault, but by pock-marking the ground with shell holes, it only compounded the difficulties of advance. Ultimately, the newly developed tank proved the ideal solution, able to flatten wire and provide effective cover for troops as they advanced behind them. The concept of a bayonet mounted wire-breaker was simple enough. As the soldier advanced through fields of barbed wire and machinegun fire towards the enemy trenches, it was supposed he would possess a sufficiently level head, and have enough time to break through stands of wire individually. To accomplish this he simply had to slide a strand of wire along the bayonet blade until it came to rest in the notch of his Wire-Breaker.

In doing so, it was automatically aligned with the muzzle of the rifle. Theoretically, firing a round would be sufficient to break the strand, allowing him to proceed with his advance. The illustrated Wire Breaker No 1 was approved on 9th May 1912 the British War Department in anticipation of the needs to come.

Manufactured from sheet steel, the wire-breaker was designed to slide along the bayonet blade until it rested against the crossguard. A built-in spring clip held it in place. British Imperial forces were likely to find they could either be fixing Pattern 1903 or 1907 bayonets to their SMLE Rifles. The blade width of a P1903 bayonet is 30mm, a P1907 bayonet only 23mm. To render the Wire Breaker universal to both bayonets, a swiveling wedge was built into the bottom, providing a snug fit against either blade when moved to the appropriate position. To help the soldier determine the correct position of the wedge during the heat of battle, the numbers 3 and 7 were stamped into the opposite sides of the body and swivel of the Breaker, corresponding to the pattern of bayonet in use. Matching the two numbers meant the Breaker was in the correct position to fit either the P1903 or P1907 bayonet. Five further patterns were approved, including one to fit the P1913 bayonet, and all were finally declared obsolete in February of 1921.

Lost, destroyed or recycled over the years, these mass produced penny items are now extraordinarily hard to find, and highly desirable to the bayonet collector. Any questions please MESSAGE ME.

New Zealand customers NZPO Courier FREE....... Because I must pay GST on all "local sales" :. Receipt will be issued on request. The item "WW1 Lee Enfield SMLE.

The seller is "phillip_in_new_zealand" and is located in Auckland (aprox. 12,000 "clicks" from USA). This item can be shipped worldwide.