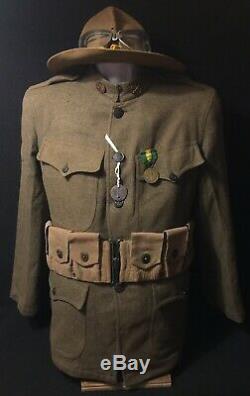 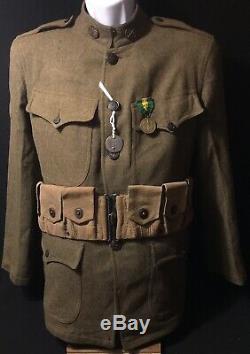 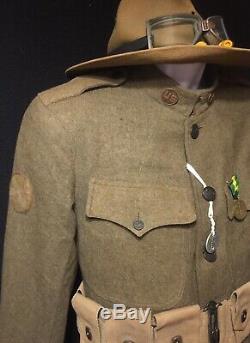 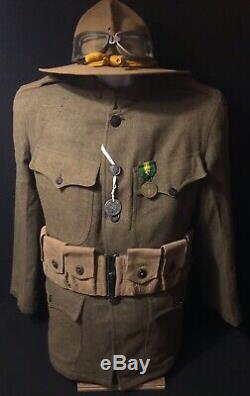 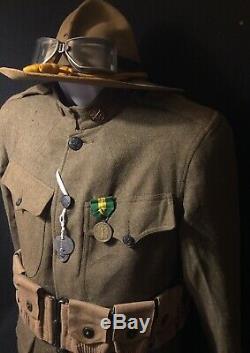 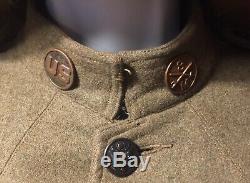 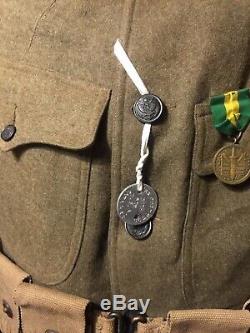 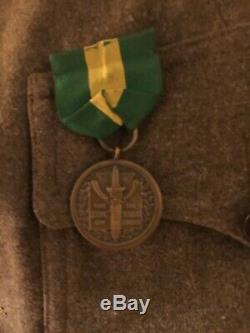 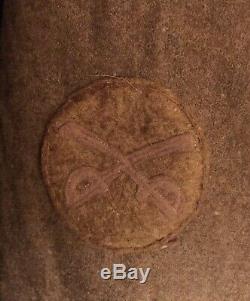 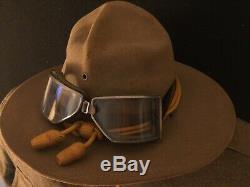 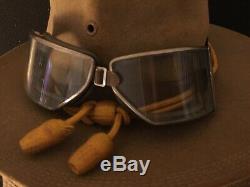 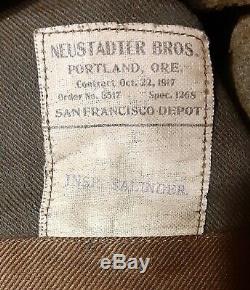 WW1 M1917 SPEC 1268 Enlisted Service Uniform "M" Co. Cavalry Regiment identified to PFC Burr McVitty O'Donnell of Pennsylvania. Corporal Burr McVitty O'Donnell was at the Border with Mexico from 1917 through 1918 & France 1918 through 1919. Patton was his Commanding Officer while at the Mexican Border. O'Donnell #1044263 served with the 8th U. He was transferred to Battery "C", 19th U. Field Artillery Regiment in 1918 and left from New Jersey to France. In 1919 as a Corporal with BTRY "C", 19th Field Artillery Regiment. This is a M1917 SPEC 1268 Enlisted Service Uniform. The tag is from the ultra rare, San Francisco Depot.

8 WWI Dog Tag, Burr O'Donnel PVT. 9 Original Issued Mexican Border War Medal. 10 WWI PFC Cavalry patch. In 1905, the regiment was ordered to the Philippines with the assignment of defending the islands from guerrilla activity. In addition, they patrolled supply and communications lines and sources of water on the islands of Luzon and Jolo.

This time the troopers fought the rebellious tribesmen on the island of Mindanao and in the Sulu Archipelago. In the battle of Bansak Mountain in June 1913, a total of 51 members of the 8th Cavalry's Troop "H" joined other soldiers in a violent battle with hundreds of Moro warriors on Jolo. On 21 September, it joined with the 7th Cavalry Regiment to form a provisional cavalry brigade. Returning to the United States on 12 September 1915, the regiment was stationed at Fort Bliss, Texas, as part of the 15th Cavalry Division. Troops were dispatched along the border for the purpose of subduing the activity of Mexican bandits who were giving the ranchers a great deal of trouble.

Responding to a border raid at Columbus, New Mexico, by Pancho Villa, an expedition led by John J. Pershing was launched into Mexico on 15 March 1916.

First Lieutenant George Smith Patton, Jr. Was one of Pershing's aides-de-camp. On April 7, 1918; there was a skirmish with Mexican bandits. In Commanding at Fort Hancock during this time from Dec 2, 1917 to May 10, 1918, was Capt.

On 13 September 1921, with the initiation of the National Defense Act, the 1st Cavalry Division was formally activated at Fort Bliss, Texas. The first unit of the 1st Cavalry Division, the 1st Cavalry Regiment, had been preassigned to the 1st Division on 20 August 1921, nearly a month before the formal divisional activation date. Upon formal activation, the 7th, 8th, and 10th Cavalry Regiments were assigned to the new division. It served as a horse cavalry regiment until 1942, when it took part in amphibious training. The item "WW1 M1917 SPEC 1268 Cavalry PFC Service Uniform M Co, 8th Cavalry Regiment" is in sale since Wednesday, May 27, 2020.

This item is in the category "Collectibles\Militaria\WW I (1914-18)\Original Period Items\United States\Uniforms". The seller is "littlebelleblue" and is located in Chesnee, South Carolina. This item can be shipped to United States.