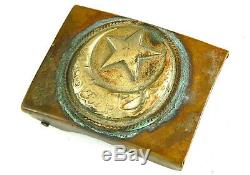 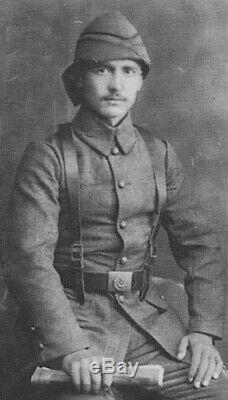 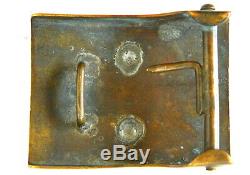 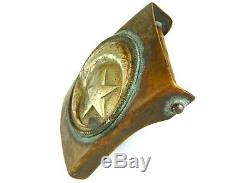 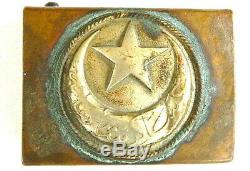 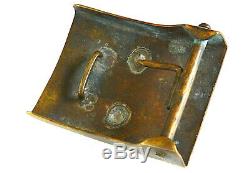 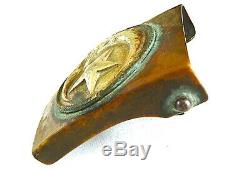 1909 BELT BUCKLE MANUFACTURED BEFORE THE FIRST WORLD WAR. THE BUCKLE ITSELF IS BRASS AND RECTANGULAR-SHAPED WITH A NICKLE-SILVER TYPE B CIRCULAR BADGE, WHICH FEATURES A RELIEF OF A CRESCENT MOON, A FIVE POINTED STAR AND THE ARAB SCRIPT FOR ASKAR-I SHAHANEH MEANING IMPERIAL ARMY. 1909 BELT BUCKLE IS A TURKISH MODIFICATION OF THE IMPERIAL GERMAN M.

AND SAW EXTENSIVE SERVICE DURING WWI, INCLUDING GALLIPOLI AND THE PALESTINE CAMPAIGN. Fashioned with brass, and featuring a nickle-silver badge, this example is representative of the Type B variant of the M1909, itself an Ottoman adaption of the Imperial German M. 1895 Mannschaftskoppelschloß Belt Buckle - Differing from the earlier Type A all-brass design. The Buckle is rectangular and constructed out of brass, and the attached circular badge out of nickle-silver. The badge features, in relief on a pebbled background, a crescent moon, the upward facing horns of which enclose a five pointed star.

The crescent contains the Arabic script for'Asakr-i Shahaneh' meaning'Imperial Army in a distinctive font, making this example an SL type variant of the buckle, which differs only in the style of Arabic script from the more common S Type. On the underside of the buckle is a rotating brass rod with two small metal prongs (one of which has now snapped off) which would have attached to holes in the leather belt. There is also a square brass loop attached to the back of the buckle to accommodate the belt clip, which is still attached, but removable. The buckle is 45 mm. It is in very good original condition.

The Brass on the Buckle is patinated with aged verdigris and in very good condition as is the Badge, barring the usual scratches and dents associated with military items that have seen operational service. The Arabic script on this example is also legible, which is a rarity for most other surviving belt buckles, as the Nickel-Silver typically degenerates over time. 1909 Belt Buckle was extensively used by Ottoman Forces throughout WWI, mainly across the Balkans and the Middle Eastern Theatre, where Ottoman Forces were most heavily engaged.

As with many other surviving M. For reference, attached to this listing is a picture of an Ottoman Turkish soldier wearing a similar M. Another example, collected by Charles Henry Livingstone, an ANZAC infantryman, and donated to the Australian War Memorial, can be viewed online at.

Much like the example listed, Livingstones was a Type B, however due to its convergent script, it is classified as the more common S type. The belt buckle was collected by Trooper Livingstone in the area around the Nek on 24 May 1915, when he participated in the truce which had been organised to allow both sides to bury their dead, particularly the thousands killed in the disastrous Turkish attack of 19 May. We stood together some 12 feet apart, quite friendly, exchanging coins and other articles, and in some cases were able to communicate.

A Turk gave me a beautiful Sultan's guard's belt buckle made of brass with a silver star and crescent embossed with the Sultan's scroll in Arabic. The story of the Sultan's Guard seems to have been a popular one on Gallipoli, but the buckle described is the standard Turkish other ranks' issue item of the period.

Our troops carried the dead Turkish bodies over the dividing line and the Turkish troops did the same for our dead. We also handed their rifles back to them. Those rifles were lying around the ground, but we first removed their bolts.

The armistice lasted until approximately 6 p. And almost immediately the Turks opened fire on our parapets. We were once again enemies'. From Australia, this is a very good example of an Ottoman manufactured Type B SL M1909 Belt Buckle. Featuring a Rectangular Brass Buckle with a Nickel-Silver Badge in very good condition, you will be hard-pressed to find another Australian sourced example in as original condition.

This item is listed on ANZACBLADE e-bay and on my website of the same name. The item "WW1 Ottoman Turkish M. 1909 Belt Buckle Type B SL Variant Museum Quality" is in sale since Wednesday, January 1, 2020. This item is in the category "Collectables\Militaria\1914 - 1918 (WWI)". The seller is "anzacblade" and is located in Griffith, ACT. This item can be shipped worldwide.