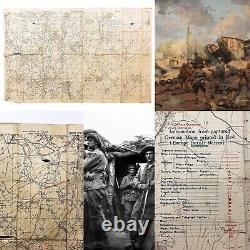 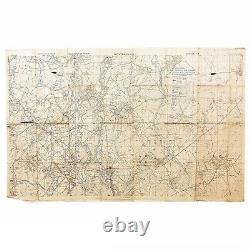 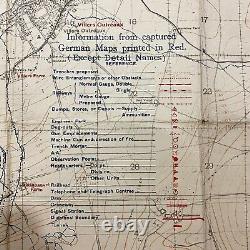 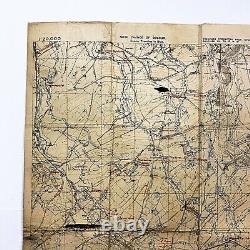 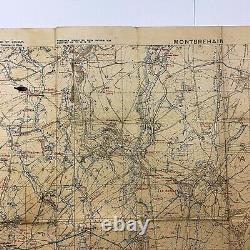 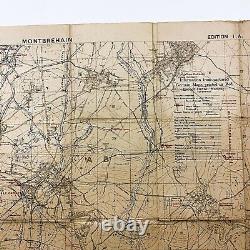 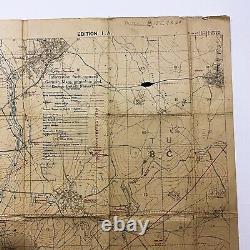 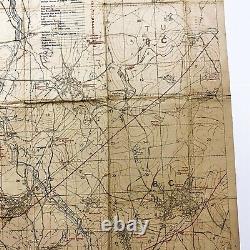 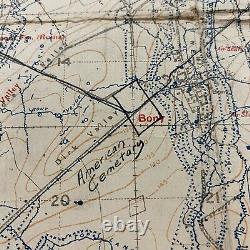 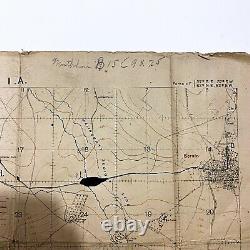 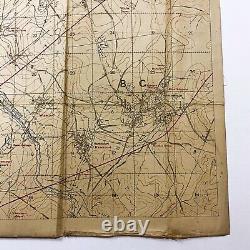 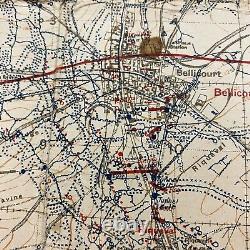 Size: 25 x 34.5 inches. This map of the area west of the Hindenburg Line includes numerous intriguing annotations. The printed information dates to September 19, 1918, the day after the town of Epehy (top-left of the map) was captured by the British 12th Eastern Division. The towns of Bellicourt and Montbrehain lie between the two red printed divisional lines, which suggests that the lines delineate the sector of either the Australian 2nd, 3rd, or 5th Division. However, the addition of two hand-drawn parallel blue lines on the map's left edge, almost certainly representing another divisional sector, suggest that the officer who used it belonged to a different division.

The map's annotations are intriguing, but their meanings are difficult to determine. It's likely that the red hand-drawn line stretching between the blue hand-drawn divisional boundaries is the position of the annotator's division immediately prior to the September 29th capture of Bellicourt by the Australian 3rd and 5th Divisions and American 27th and 30th Divisions. The hand-drawn black line to the left runs along a road that could have been a supply route. Perhaps the most mysterious of the annotations, the yellow circles that appear between the towns of Bellicourt and Le Catelet may indicate places where gas had been used. Although there is no indication that Australian forces used gas during their captures of Bellicourt and Montbrehain, it is possible that fleeing German troops released gas in trenches and dugouts as obstacles for the advancing Allied forces.

The land depicted was a key area in the Allied endeavor to breach the German's Hindenburg Line, which consisted of four major trench systems, including the Beaurevoir Line, their final prepared line of defense; when the Beaurevoir Line was taken, the Germans were forced to retreat into unfortified territory. The Australian Imperial Forces (AIF) were instrumental in the success of the effort. One of the major components of the plan was the capture and occupation of the village of Montbrehain, advantageously located on a hill that overlooked land to the east, making it key in preventing the Germans from retaking their lines. The Australian 2nd Division achieved this difficult capture on October 5th. This item is in the category "Collectibles\Militaria\WW I (1914-18)\Original Period Items\United States\Personal, Field Gear".