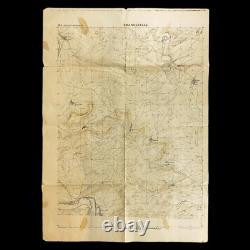 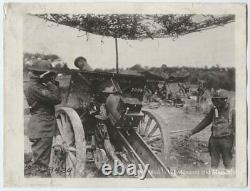 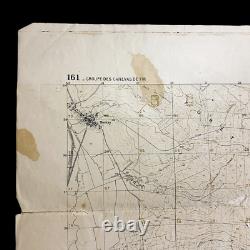 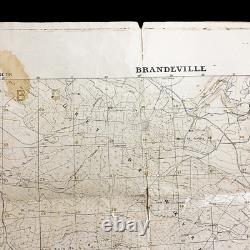 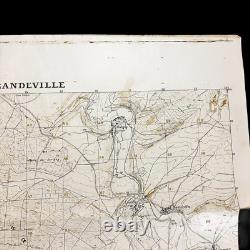 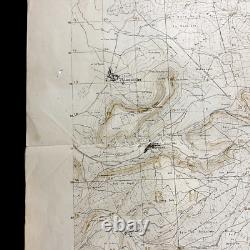 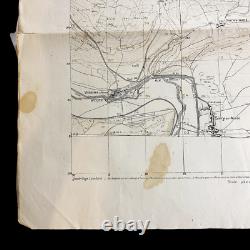 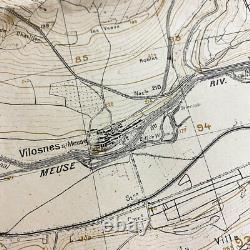 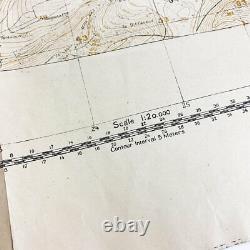 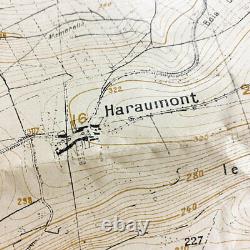 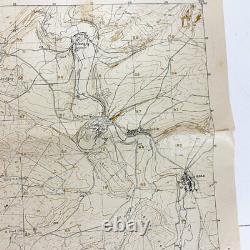 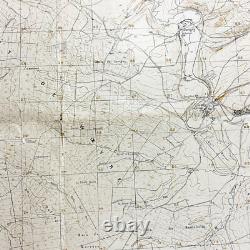 From the'bring back' map collection of Sgt. Bertolette who was an A. Artilleryman and saw extensive combat over the course of WWI serving valiantly with the 28th Division, 53rd Field Artillery Brigade, 108th (heavy) Field Artillery. The 108th Field Artillery (HEAVY) is accredited battle participations in the Oise-Aisne Offensive, Meuse-Argonne Offensive, Yrpes-Lyse Offensive.

And other Allies in the area of Brandeville during the Hundred Days Offensive (8 August to 11 November 1918) and Meuse-Argonne Campaign. The Hundred Days Offensive was a series of massive Allied offensives which ended the World War I. Beginning with the Battle of Amiens (8-12 August) on the Western Front, the Allies pushed the Central Powers back, undoing their gains from the Spring Offensive. The Germans retreated to the Hindenburg Line, but the Allies broke through the line with a series of victories, starting with the Battle of St Quentin Canal on 29 September.

The offensive, together with a revolution breaking out in Germany, led to the Armistice of 11 November 1918 which ended the war with an Allied victory. The term "Hundred Days Offensive" does not refer to a battle or strategy, but rather the rapid series of Allied victories against which the German armies had no reply. Titled "Brandeville ", this combat map shows impornt landmarks of WWI such as, the Meuse River, Vilosnes, Haraumont, Murvaux, Juvigny, and Brandeville.

It is the second deadliest battle in American history, resulting in over 350,000 casualties including 28,000 German lives, 26,277 American lives and an unknown number of French lives. Meuse-Argonne was the principal engagement of the American Expeditionary Force (AEF) during World War I. It was one of a series of Allied attacks known as the Hundred Days Offensive, which brought the war to an end.

It was the largest and bloodiest operation of World War I for the AEF even if, given the scale of other battles on the Western Front, its size was limited and the operation itself secondary as it was far from the main offensive axis. This map would have been similar to those used in the planning of attack in the area, divisional movements, as well as artillery fire support.

For the added assistance of artillery firing coordinates, a transparent overlay of fine paper would have most likely been placed over this map and written on with H+ hours and firing lines ordered by headquarters. This exclusive collection of World War I maps are from the bring back collection of Sgt.

Octover 29th - November 11th, 1918. History of the 28th Division during WWI. The first unit of the decision to go overseas arrived in France May 14th, 1918; the last element, June 11, 1918. For training purposes the division (less artillery) was attached to the 34th British Division south of Saint-Omer, where it remained until June 9th.

The division proceeded to the vicinity of Paris (June 13th) where it was attached to French troops for further training. For the same purpose the Artillery Brigade went to Camp Meueon, It rejoined the division in August 1918, When it passed to the reserve of the First Army Artillery. It later participated with the 91st Division in the Ypres-Lys Offensive, October 29th to November 11th, 1918. From June 30th to July 27th, 1918, elements of the division were attached to various French and American divisions operating in the Chateau-Thierry Sector, and participated in the Chateau-Thierry Sector, and participated in the Champagne-Marne Defensive, and the Aisne-Marne Offensive. In the later operation the division for the first time entered the line as a unit, relieving the 39th division (French), on July 28, and remaining in line until relieved by the 32nd division on July 30th of 1918. On August 7th the division relieved the 32nd division in the Fismes Sector and participated in the Oise-Aisne Offensive from August 18th to September 7th during the operation, severe fighting was encountered in the advance North to the Vesel River. From September 8th until September 19th the division was moving to the Argonne, where it took over the sector extending across the Aire Valley, and in front of the Argonne Forest, on the morning of September 20th, Expecting The Outpost line which was held by the French until the night of September 25th through the 26th. In the Meuse-Argonne Offensive the division was heavily engaged from September 26th to October 9th, in which operation the capture of Varennes, Montblainville, Apremont, le Chens Tondu, and Chatel-Chenery were outstanding features. The division was relieved by the 82nd division on October 9th, and proceeded to the Thiacourt Sector, Toul, which it held from October 16th to November 11th, 1918. During the operations the division took 921 prisoners and its casualties totaled 13,983. This item is in the category "Collectibles\Militaria\WW I (1914-18)\Original Period Items\United States\Personal, Field Gear". The seller is "premierrelics" and is located in this country: US. This item can be shipped worldwide.